Top Posts
Choppy Conditions as Volatility Appears to Escalate
Bitcoin bulls plan to flip $23K to support...
Founder of Las Vegas-based cryptocurrency company sentenced to...
Cryptocurrency fraud scheme lands man 8 years in...
Blockchain IM apps to reach over half-billion dollar...
Ethereum Developers to Launch New Testnet ‘Zhejiang’ for...
US Air Force Pumps $30M Into Blockchain for...
Ethereum Set to Trial Staking Withdrawals on Shanghai...
Coinbase ‘in a much better position’ after cost...
What Is the Ethereum Blockchain’s Shanghai Hard Fork,...
Home Bitcoin NewsBitCoin Forex Will it be Able to Break Over this Major R
BitCoin Forex

Will it be Able to Break Over this Major R

The next day or 2 could give us an idea as to where we are going for the next couple of weeks, as there will obviously be a lot of decisions made based upon Federal Reserve policy.

From a technical analysis standpoint, it’s obvious that the $18,000 level is crucial, at least in the short term. If we can break above that level after the CPI announcement, that would be a very bullish sign and could send this market toward the $20,000 level. That of course is a large, round, psychologically significant figure that a lot of people would be paying attention to, so I would anticipate a little bit of resistance. Breaking above the $20,000 level would be a huge victory for Bitcoin, but it’s going to take a significant amount of momentum and force to make that happen.

If we were to turn around and break down below the 50-Day EMA, then it’s possible that we would pull back toward the bottom of the overall consolidation range, meaning somewhere near the $16,000 level. That is more likely than not if we have a hotter-than-anticipated CPI figure. That would probably have everything in a bit of a “risk off” mood, and therefore Bitcoin would get hit as a result.

The next day or 2 could give us an idea as to where we are going for the next couple of weeks, as there will obviously be a lot of decisions made based upon Federal Reserve policy. Bitcoin does not have much in the way of fundamentals helping it, as we are in “crypto winter”, but it’s it could open a short-term trade that we could take advantage of to the upside. On the downside, we can sort that as well. Only time will tell, but I think by the time we get through Thursday, we should have an idea of a nice setup in this market, so Bitcoin is something worth watching. 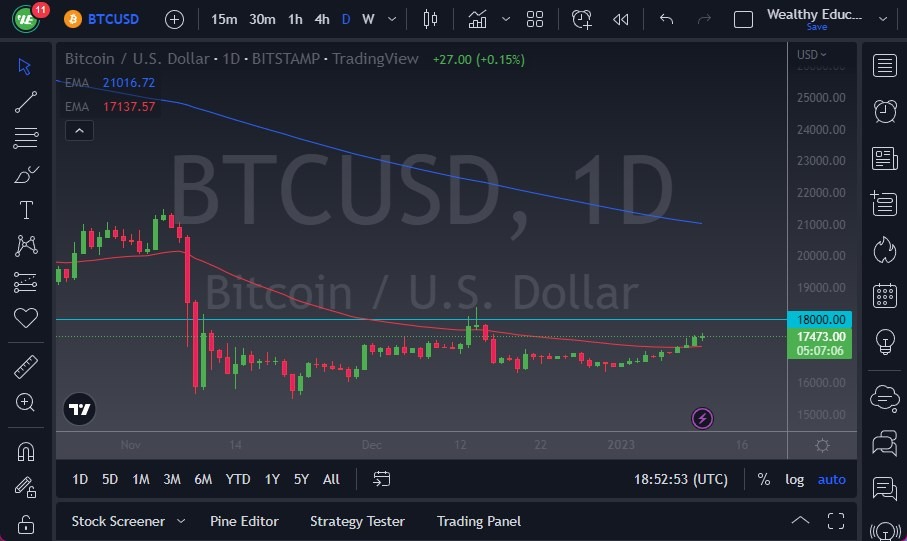 Ready to trade Bitcoin to the dollar? We’ve made a list of the best crypto brokers worth trading with.

Bitcoin feels the need for correction before further...

Bitcoin dipping a little in Asia, still having...

Bitcoin recharges with optimism, aims for a $25K...

Bitcoin Is Right at Major Resistance

Old altcoins are back in vogue