There are various degrees of risk-off, and markets have just entered one of the worst kinds. An example of a less severe form of risk off would be when equities tumble due to a slew of weak earnings, and currencies or bonds take little to no notice. A sure sign of a classic ‘risk-off’ environment would be when equities, commodities and bond yields fall yet bond prices (which move inversely to yields) and gold rise as they’re considered to be ‘safe-haven’ assets. But that’s not what we’re currently seeing. 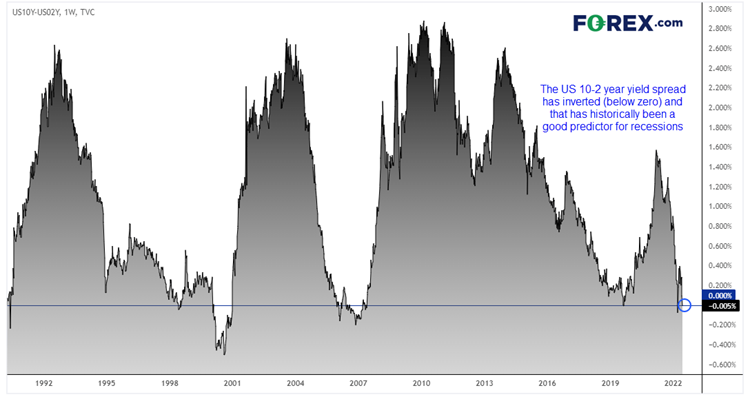 The S&P 500 has entered a technical bear market, the US 2s 10s yield curve inverted (a harbinger of doom if there ever was one), bitcoin is crashing and gold (typically a safe-haven) also being hurled overboard. This is de-risking at its finest. Investors are rushing for the same small exit in hope of offloading their falling assets for cash.

Why are investors de-risking?

The straw which broke the camel’s back was the very hot inflation report form the US on Friday. There had been hopes that inflation had peaked, yet clearly it has not. Eurozone employment also reached a record high last week and central banks are now being forced to hike rates at the risk of tipping the economy into a recession. And to really spice things up, the Fed, BOE and maybe even the SNB are expected to hike interest rates this week. And there are now talks of the Fed even having to hike by 75-bps this week to save credibility.

Incidentally there are also concerns in the crypto area in general, with crypto-lender Celsius hitting the headlines after announcing they are suspending all withdrawals until further notice. Whilst the company statement blamed “market volatility”, it does little to soothe suspicious minds that crypto is just a Ponzi scheme, and likely added to the market turbulence as investors fear contagion (such as other crypto platforms following suit).

Bitcoin is not the safe-haven it was once considered

There was a time that traders would flock to Bitcoin in times of uncertainty. Well those days are clearly no more, having fallen ~65% from its record high. Part of the reasoning is that institutional money has been a huge driver of bitcoin (and crypto in general) since 2017, so when markets enter a period of ‘risk-off’ or ‘de-risking’, crypto such as bitcoin is also vulnerable to being sold as investors move to cash or pay for margin calls. 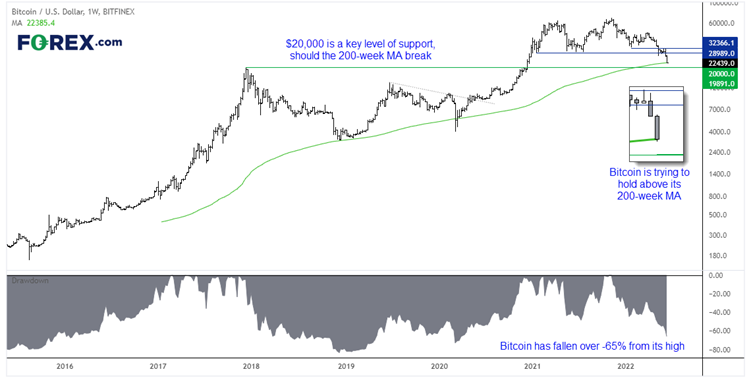 We can see on the weekly bitcoin chart (log scale) that it topped out around the same time as US indices in November. Bearish momentum is now accelerating and the market is down a staggering -65%. Perhaps more worryingly is that we have seen this market fall as much as -80% to -90% in the past (which could see it fall as low as $6,200 – $13,500 is such a fall were to be repeated).

However, two key levels reside nearby which could support a fall. Bitcoin is currently clinging on to its 200-week average, a level which has generally seen the market bounce when tested. And if prices do break lower, $20,000 is a big round number and has provided support and resistance since 2019. But a decent market to watch alongside bitcoin would be the US stock market. 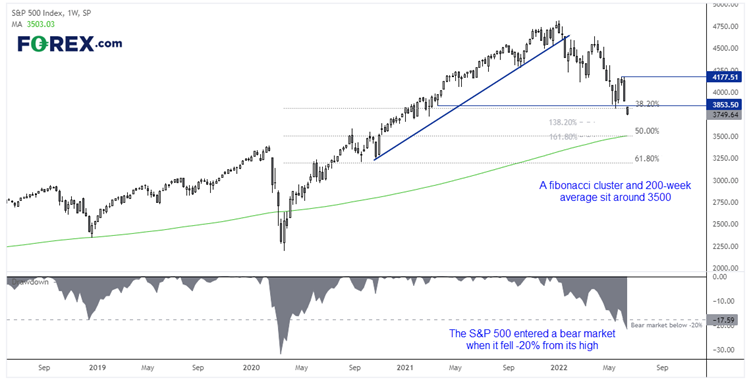 US equities were sharply lower yesterday and entered a technical bear market having fallen -20% from its high. A series of lower lows and highs shows us that the weekly chart is in a confirmed downtrend, although it should be remembered that ‘bear market rallies’ can post strong returns before breaking to new lows. Our bias remains bearish below 4,000 and for a drop down to 3,500, where the 200-week average, and 50% retracement and 161.8% Fibonacci projection reside.

How to trade with FOREX.com

Follow these easy steps to start trading with FOREX.com today:

This Week in Coins: Bitcoin and Ethereum Crash More Than 30% as Recession Fears Loom

Litecoin: Evaluating the possibility of LTC going back to $100 – AMBCrypto News

Continues to Look for Lower Areas