Commodity trading vet Peter Brandt, who can boast more than 40 years of experience in the industry, recently opined that Bitcoin could be trading at $5,500 in July 2020. This price point would mark the bottom of the long-lasting downtrend.

Recently, Brandt outlined the rationale behind the aforementioned figure. In his “$100,000 ahead… but when and how?” video, he opined that BTC could bottom around $5,300 in July if the top coin fails to stage an upside break from the five-month descending channel.

On Sept. 30, after Bitcoin’s dramatic 20 percent drop, Brandt predicted that the top coin could find a new bottom in February before a moonshot to $50,000, but it seems like the trading legend had to shift his target. Less than a month earlier, he suggested that the BTC price could have entered its fourth parabolic phase.

However, if Bitcoin breaks below the December 2018 low of $3,200, this could mean the end of its story, according to Brandt.

“It’s at that point that I would capitulate. Should we violate this level decisively, I would come to the conclusion that Bitcoin story is over and it’s done with.” 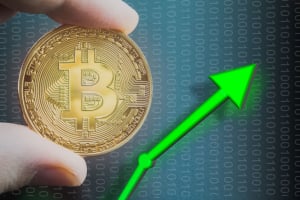 The most interesting part about Brandt’s recent price call is that he predicts that Bitcoin may find a new bottom after the upcoming reward halvening in May 2020. This flies in the face of many bulls who expect the crypto king to rally due to such a highly anticipated event.

2019 was the least profitable for Bitcoin miners ever, and the main bullish argument for Bitcoin in 2020 seems to be that a plethora of miners would stop operating at a loss. Brandt explains that the miners of metals and miners still stay on-board.

Where in the world do you get the false idea that producers must be profitable. Tell that to miners of metals and farmers and producers of other raw. material.

The same is likely to be true for Bitcoin once the block reward gets cut from 12.5 BTC to 6.25 BTC.

What’s Next in the Securities Case Against...