Top Posts
7 of the Best Altcoins to Buy
Blockchain.com Becomes the Largest Crypto Company in Latin...
Thai Crypto Unicorn Plots Expansion in Bid to...
Ethereum in 2022: What Is Money in the...
XRP Price Prediction: Ripple under pressure, struggling to...
Bitcoin is so far proving to be an...
The leader of Facebook’s stalled cryptocurrency project is...
Market Wrap: Bitcoin Underperforms as Ether and Other...
Blockchain technology firm to move to Stamford from...
Legal Counsel for Blockchain Smart Contracts Announced for...
Home Ripple 'Overtime, we will see the NFT market broaden,' says Ripple’s CTO David Schwartz – Cointelegraph
Ripple

Ripple may be a bit late to the NFT party, but the XRP Ledger will attempt to become an industry game changer and challenge Ethereum’s hegemony. 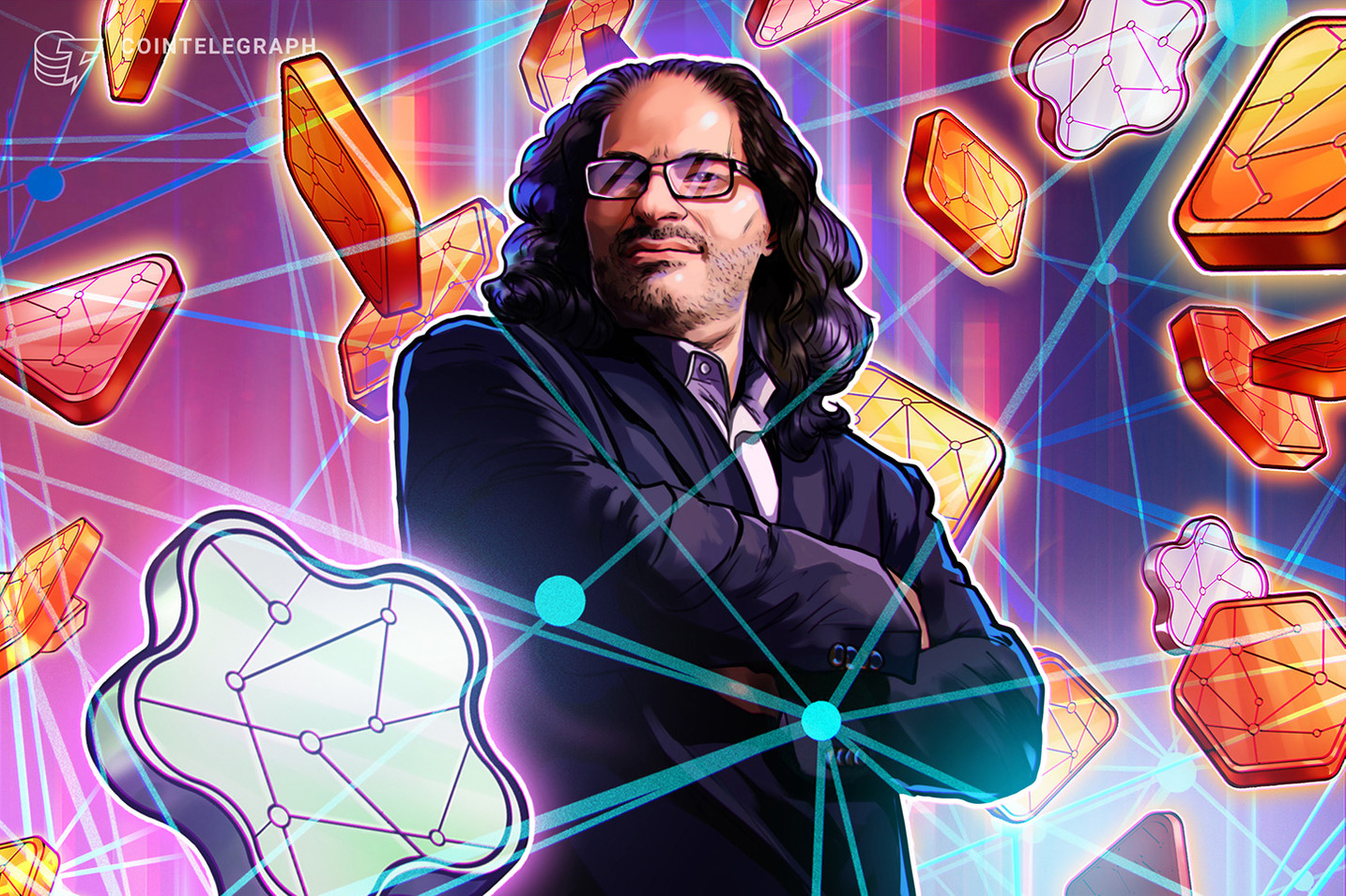 Nonfungible tokens, or NFTs, have been dominating the crypto market this year. With sales topping over $2.5 billion during the first half of 2021, it shouldn’t come as a surprise that both the crypto community and mainstream creators are launching NFTs in hopes of driving revenue and engagement. The rise of the Metaverse has also pushed the adoption of NFTs, demonstrating the value of nonfungibles for major brands and social media platforms alike.

While NFT sales soar, the Ethereum blockchain continues to rule the space. For instance, a recent report from Cointelegraph Research found that Ethereum represented at least 97% of every NFT market sector, which includes games, collectibles and marketplaces. It’s also interesting to point out that blockchain analytics firm Moonstream found that around 17% of addresses control more than 80% of all NFTs on Ethereum, demonstrating the vast inequality that still exists in the NFT market.

Although this is the case, it’s important to note that nonfungible tokens are still a very new and early concept. Even though Ethereum is currently dominating the market, there are significant competitors.

For example, blockchain payments firm Ripple recently announced an investment in the NFT marketplace Mintable, which would allow the platform to integrate with the XRP Ledger (XRPL) to enable creators to securely and efficiently sell their NFTs. In addition, in September this year, Ripple launched a $250 million creators fund to foster innovation in tokenization, specifically focused on nonfungible tokens.

Given Ripple’s recent involvement in the NFT space, Cointelegraph spoke to David Schwartz, Ripple’s chief technology officer, during NFT NYC to learn more about the company’s growing interest in nonfungible tokens. Schwarz also discussed other topics including the rise of central bank digital currencies, or CBDCs, the goals behind a Wrapped XRP (wXRP) token and Ripple’s upcoming roadmap.

Cointelegraph: Thanks for joining me, David. First off, what did you discuss during your talk at NFT NYC?

David Schwartz: My talk at NFT NYC was mostly about carbon-neutral NFTs and solving the energy consumption problem. Obviously, we aren’t going to solve climate change in the blockchain space, but the least we can do is not make it a lot worse. It’s not a technical problem — we know how to not consume that much energy, it’s just a matter of convincing people to adopt the technologies that are more climate-friendly.

Cointelegraph: Ripple is now letting people create NFTs on the XRP Ledger. Can you discuss this in detail?

DS: We were a little late to the party, but not too late. If NFTs are successful, then we are all still early. We initially started to look at how people wanted to use NFTs and realized that a lot of the challenges people were facing were due to the technology being very primitive.

“Every company wanting to get into the space needed a tremendous amount of specific expertise, which isn’t a good way to grow. So, building that tooling is what we’ve been focused on. Also, sometimes money is the obstacle.”

When someone has a good idea with the right tooling and the right team, sometimes they just need more money to scale. We can help them overcome this to prove the technology will work the way they want it to.

Cointelegraph: You also mentioned that the XRP Ledger is energy efficient. Could you explain why this is the case?

So, PoW creates artificial scarcity by using something scarce, which is energy. When energy is purely used to create artificial scarcity though, it drives up cost. The only reason you’d want to do this is if you are getting a cut of the money. Only the people getting those fees are promoting that technology.

In the XRP Ledger, no one gets transaction fees, so no one wants high fees. The fee literally covers the cost of processing the transaction. The fact is that the XRP Ledger works just as well without artificial scarcity.

Cointelegraph: Are there any other benefits of using the XRP Ledger for NFTs versus Ethereum?

DS: Yes, one of them is the scalability, or the number of transactions per second. There are things you can do on Ethereum though that you can’t do on the XRP Ledger. That’s why a lot of decentralized finance (DeFi) work today is happening on Ethereum. You can do almost anything you can envision, like things with loans, or TradeFi, or mortgages and staking. We don’t have those capabilities on the XRP Ledger today, but you can mint NFTs.

We don’t have those capabilities on the XRP Ledger today, but you can mint NFTs. We also have a decentralized exchange (DEX), and you can issue new tokens. Payments are cheap and fast, so to some extent, it’s a fundamental engineering tradeoff.

“If you want to do everything, then you can’t be very good at anything. The XRP Ledger has a list of things it does really well. If one of those are the things you need, that’s great. But, if one isn’t what you need, then you need to move to something more general.”

Part of Ethereum’s low transaction speed and cost is due to the fact that you can build more flexible technologies on the blockchain. Most people who build on the XRP Ledger are doing complex things, but for technical reasons, they don’t need these to be right on the ledger.

Cointelegraph: What are the best use cases for someone wanting to mint an NFT on the XRP Ledger?

DS: Today, the use cases are mainly collectibles. On the XRP Ledger, the cost is a lot lower, so if you are building an NFT on Ethereum it would have to be worth at least $500, and even then the fees would be close to $100. The fees are much less on the XRP Ledger and that allows for a broader range of use cases.

Cointelegraph: I also wanted to discuss Wrapped XRP. Could you go into detail about that?

DS: Wrapped XRP is an asset that is designed to track the price of XRP. For every Wrapped XRP, there is an XRP somewhere tied into an ecosystem that keeps that XRP locked until the Wrapped XRP is free. The idea here is they should track close in price. Wrapped XRP will behave similarly to XRP. For instance, if all you are using XRP for is moving value, and you have something whose value is the same, then these should serve as substitutes in the market.

“The disadvantage of Wrapped XRP is that you can’t move it cheaply and quickly on the XRP Ledger like XRP. But, the advantage is that you can use it in DEX on Ethereum.”

For instance, if you have 500 XRP to use in a DEX and you just can’t do it today at any price, then Wrapped XRP would allow you to get the tokenomics of XRP and the semantics of Ethereum. That will help keep XRP from getting locked out of features. We can expect to see the Wrapped XRP launch in December.

Cointelegraph: What’s next for Ripple?

DS: We’ve been pushing hard for CBDCs. What’s exciting is that there are a lot of people in the space who don’t really know what CBDCs are capable of. Our vision is to imagine that every financial institution in the world is able to settle every fiat currency with every other financial institution in seconds. That’s huge, but it takes interoperability and security.

“If you are going to build a payment system that big, then you need a security model that isn’t what swift uses, and blockchains pretty much don’t have security problems.”

Another thing we are working on is federated side chains that allow assets to move freely between blockchains. Wrapped XRP is an example of this since it allows XRP to move between the XRP Ledger and Etherem, but these are point solutions to specific problems. The advantage of solutions to a specific problem is that it allows a type of innovation that is currently not possible.

Today, if you want Ethereum smart contracts, you have to build on a blockchain with Ethereum smart contracts. You also have to follow rules like how big a smart contact can be. Therefore, you can’t innovate at the level of changing those rules. What federated sidechains do is it allows you to innovate at the lowest level, so users can build a blockchain with whatever fees they want and whatever assets they want. It can be public or private, and it can be live in a short period of time with real money.

This is great for developers who need to solve specific problems, or who want to make changes to other blockchains and need to convince people that those changes work and are safe. Federated sidechains provide a recipe today to build live blockchains that allow users to innovate in the blockchain itself.

Australian banks are opening up to cryptocurrency: what does it mean for you? | Commonwealth Bank