Here’s My Top Cryptocurrency to Buy in December

The crypto sector has firmed up in recent weeks after an inflation-powered free fall in 2022 and the sudden FTX meltdown in November. Cryptocurrency prices have evaporated in almost every corner of the market. Crypto investors are licking their wounds, but there’s a clear upside to this painful market malady.

Some of the best cryptocurrencies are now on fire sale, even if there’s nothing wrong with their specific operating models. In particular, I’m thrilled to see the Glimmer (GLMR -2.92%) token trading at a tiny fraction of its launch-date price.

This is a fairly obscure token, but the name should ring a bell if you pay attention to the Web3 content ecosystem. The Glimmer token serves a highly specialized role in that simmering revolution, a couple of layers away from the headline-writing crypto names.

Technically, Glimmer is a utility token on the Moonbeam development network. In turn, Moonbeam is a so-called parachain of the Polkadot (DOT -4.12%) ecosystem.

Polkadot is a development system that lets programmers tap into the ultra-specialized functions of many different blockchains. It’s also the official blockchain network of the Web3 project. Moonbeam provides some key pieces of that puzzle, including full compatibility with the industry-standard Ethereum (ETH -2.21%) platform. Glimmer is the token that does all the work in the Moonbeam network.

Glimmer is easy to miss from a bird’s-eye view. In fact, some investors know it as the Moonbeam token instead, similar to how the ETH token is confused with the Ethereum network it serves and how the DOT token has taken on the Polkadot name. It’s one microscopic thread of a much larger quilt, only made more invisible by the name-based confusion.

However, it’s a powerful and important component of a massively ambitious technology platform. Without Glimmer and Moonbeam, Polkadot would lose much of its power and the Web3 sea change would grind to a halt.

Glimmer’s price topped out at $29.84 per token on Jan. 11, 200 — its first day on the market. Currently trading at $0.42 per token, it has lost 98.6% of that early spike’s market value. Cutting the market-launch jitters out of the equation, it’s down by a more modest 68% over the last six months. Polkadot is down by 41% over the same period, while Bitcoin posted a 44% price drop.

The cryptocurrency correction was at least partly due to the ongoing inflation crisis, which scared away many investors from higher-risk ideas. But crypto took a much harder hit than the stock market — the S&P 500 index only lost 3% of its value in the last six months.

Will Glimmer rebound from this trough?

I can’t say for sure that Glimmer will recover from this price drop and soar in the long-term future. There aren’t any “sure things” in investing, especially not in the volatile and rapidly evolving cryptocurrency sector. That’s as true for Moonbeam and Glimmer as for any other crypto name.

Another network with a different token could take over Moonbeam’s cross-network development function in the Polkadot ecosystem. Polkadot itself could be replaced by a different solution for managing the Web3 network architecture.

Web3 could fail to take off at all, leaving the current kings of social networking and ad-based revenue streams on the throne. Any of these events, or some combination of them, would be bad news for Glimmer and its token holders. 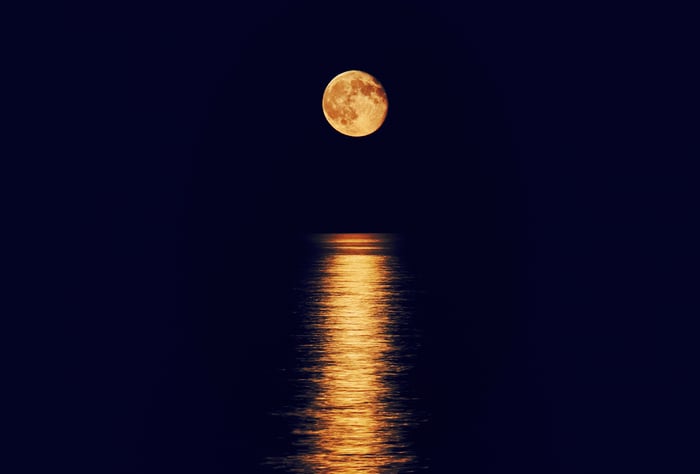 However, I believe that Web3 is a sensible successor to the current online experience. Polkadot was designed explicitly to support that project, and Moonbeam was one of the first Polkadot parachains, precisely because it’s critical to the long-term health of this platform.

Therefore, I see a bright future for Moonbeam. I expect the Glimmer token to become heavily involved in the next generation of financial-technology platforms, online games, internet-based communications, and more.

This is the stuff that long-term value is built on in the cryptocurrency world. Meaningful value is created when developers and users embrace a particular blockchain network and put the related tokens into heavy rotation.

Long story short, I expect Glimmer’s market value to grow into billions of dollars over time. The fully diluted market cap currently stands at a measly $436 million. But again, this isn’t a 100% guarantee, and you shouldn’t bet the farm on this token — or on any other single coin, stock, bond, or token. The risks I stated earlier are real, and that’s an incomplete list.

But Glimmer looks ripe for a modest nibble at today’s deeply discounted price. I can’t wait to see this blockchain network grow up.

Bull vs. Bear: Betting on the Blockchain

How have Bitcoin and Forex affected each other in 2022?

How cryptocurrency made these four ordinary people...