Bitcoin: First signs of a potential temporary bottom near $20k.

My last signal on 2nd June was not triggered, as there was no suitable price action when any of the key levels were first reached that day.

Trades may only be entered before 5pm Tokyo time Wednesday.

I wrote in my last analysis on 2nd June that the best strategy for now was to stand aside until the price tests the $28k area again, and to watch what happens. If Bitcoin recovered and gets established above $32k / $33k, that would be a bullish sign.

This was a good call, as the price never got established above $32k / $33k since then, but it did finally break down below $28k, which has triggered a sharp fall over recent days, as I had expected.

There is a great deal of fear in crypto markets now, with prices beginning to force institutional liquidations. Technically, the long-term price charts suggest that the strong bearish movement could drive the price of Bitcoin all the way to $13k quite soon.

There is strong risk-off sentiment in the market, which is punishing the crypto sector, but crypto also has its own problems, so Bitcoin is suffering a double whammy.

Despite the very bearish situation, over the past few hours there have been initial signs that the price may be making a bottom just above $20k. We see quite a strong bounce from this area, but it is far from clear that this can hold up.

I think a short trade from a bearish reversal at the nearest key resistance level, which is situated at $24,016, will be a very attractive trade if it sets up today. This is likely to be the day’s pivotal point. If the price can get established above that level, it would be a bullish sign suggesting that $20k will hold for some days or even weeks. 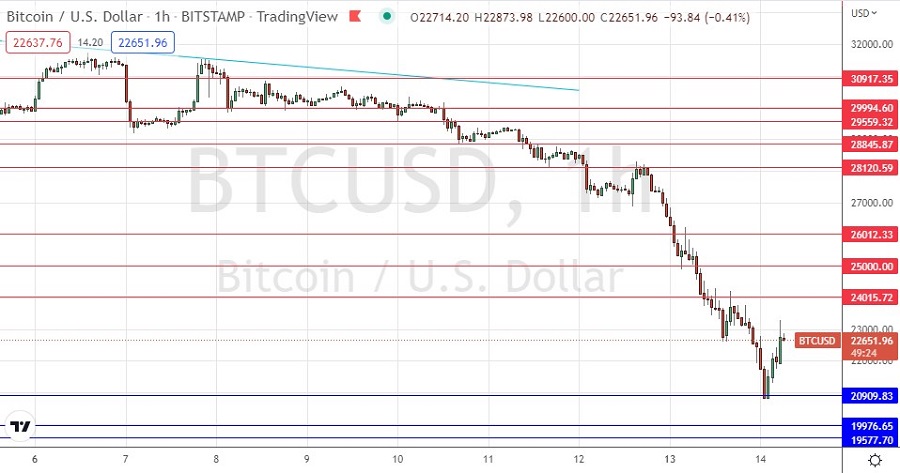 Regarding the US Dollar, there will be a release of PPI data at 1:15pm London time.

Coinbase lays off 18% as execs prepare for recession, ‘crypto winter’

Ethereum: Can the upcoming ‘Merge’ pull ETH back from the abyss

Bitcoin at Risk of Further Weakness