Top Posts
Crypto Ethics: The Math of Socially Responsible Investing...
What Is The Blockchain?
If the Ethereum price does this, it’s out...
Ethereum’s Arbitrum to Be Used by Norwegian Government
Harmony Offers $1M Bounty After Discovering $100M Altcoin...
Cryptocurrency Bear Market: This Bitcoin Crash Is Different...
Ethereum: Buy The Dip Before The Merge (ETH-USD)
As Bitcoin Scales With Lightning Network, What Role...
How low can Ethereum price drop versus Bitcoin...
Which One Is the Winner?
Home Bitcoin NewsBitCoin Forex BTC/USD Forex Signal: Recovery from Dangerous Breakdown
BitCoin Forex

My previous signal on 9th May was not triggered, as there was no bullish price action at any of the key support levels I had identified when they were reached that day. Unfortunately, the price came close to $33,828 but never quite reached that level.

Trades may only be entered prior to 5pm Tokyo time Wednesday.

I wrote in my last piece on 9th May that Bitcoin had fallen with strong bearish momentum after breaking down from a consolidating triangle chart pattern and entered what had historically been a very pivotal zone, from the support level at $28,607 to approximately $35k. I thought that if the price could get established below the support level at $28,607 it could quickly fall to $10k or even lower.

The price did get established below $28,607, but my call was not great as the price rebounded quite firmly and is now making a bullish consolidation above what is again the nearest key support level at $28,607.

I see Bitcoin’s recovery from the price area below $28,607 as technically significant, showing that buyers are still prepared to step in strongly when Bitcoin reaches long-term lows.

If the support level at $28,607 does not break down, I see the next likely price movement for Bitcoin as upwards to the next resistance level at $33,445.

I will be happy to take a long trade here if we get a retracement to $28,607 and a bullish bounce off that level. 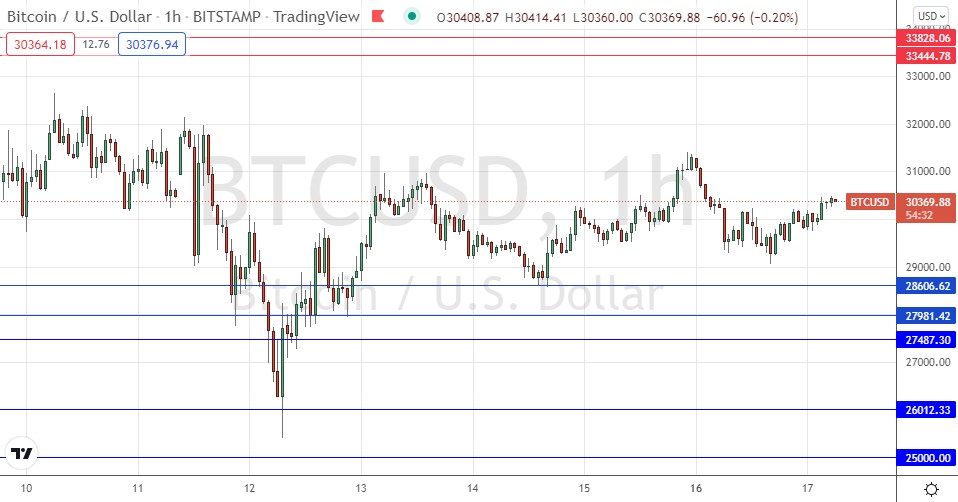 Concerning the USD, there will be a release of Retail Sales data at 1:30pm London time.

Profit-Taking to Go On For a While