Top Posts
Ethereum: Buy The Dip Before The Merge (ETH-USD)
As Bitcoin Scales With Lightning Network, What Role...
How low can Ethereum price drop versus Bitcoin...
Which One Is the Winner?
Litecoin (LTC) Up 5.13% Saturday: What’s Next?
Small-time investors achieve the 1 BTC dream as...
One Low-Cap Altcoin Skyrockets by More Than 140%...
Changpeng Zhao: tech chief in the eye of...
Can you earn passive income running a Lightning...
XRP Price Prediction: Will Ripple become the one-world...
Home Bitcoin NewsBitCoin Forex BTC/USD Forex Signal: Looking Weak
BitCoin Forex

There are signs of a potential temporary bottom near $20k.

My last signal on Tuesday could have produced a long trade from the bullish pin bar rejecting the support level I had identified at $20,910, but I did make it clear bias remained bearish below $24,016.

Trades must be taken prior to 5pm Tokyo time Thursday.

I wrote in my last analysis on Tuesday that strong risk-off sentiment in the market had created a very bearish situation, but also there were initial signs that the price may be making a bottom just above $20k. I was looking for a short trade from a bearish reversal at the nearest key resistance level, which was situated at $24,016, likely to be the day’s pivotal point.

This was a good call as although $24,016 was not reached, the price has remained bearish below that, but the tentative bottom I called around $20k has also held.

We are now seeing a bearish consolidation between $20k and $23k, with the current dominant wave at the time of writing being bearish.

Yesterday’s FOMC statement and projections produced a minor relief rally which pushed the price up, but it ran out of steam here quite quickly at $23k.

I think shorter-term traders can enter short trades at pullbacks within bearish waves closer to $23k than $20k if the available spread is acceptable. Longer-term traders should look for a short from another reversal at $23k or wait for a daily close below $19,500 which would be a very bearish sign.

A daily close below $19,500 will indicate that Bitcoin is ready to take a bearish trip to as low as $13k.

The entire crypto ecosystem is showing severe signs of strain. However, we may see buying at the $20k area, but below $20k we will see a big wave of forced institutional liquidations which will be quite likely to trigger a further strong fall in the price of Bitcoin.

I personally will not take any long trades here under any circumstances. 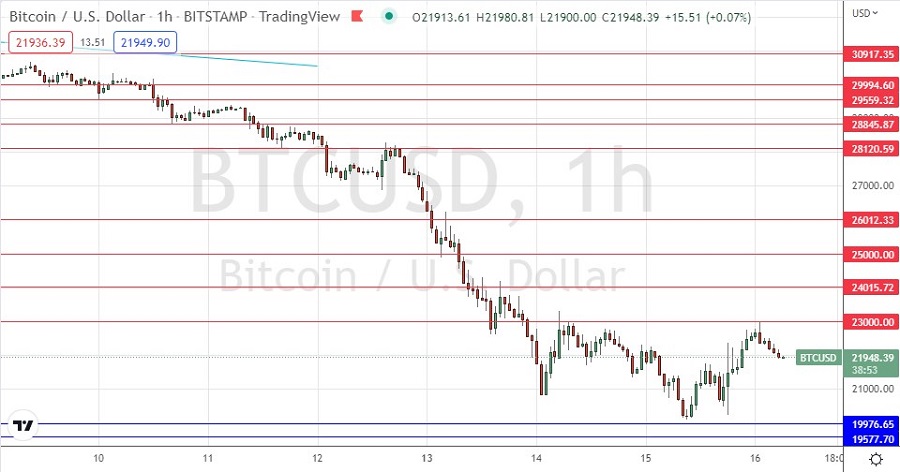 There is nothing of high importance due today regarding either Bitcoin or the US Dollar.