Bitcoin (BTC) has calmed down after two weeks of extreme volatility. The first digital coin has been sitting in a range limited by $8,000 on the upside and $7,800 on the downside with occasional forays on both sides. Meanwhile, the altcoins have been much more volatile with Bitcoin SV gaining as much as 71% in recent seven days. The coin that forked from Bitcoin Cash moved to the 12th place in the global cryptocurrency rating with the current market capitalization of $1.77 billion

What’s going on in the crypto universe

The industry has produced tons of exciting news. While the vast majority of the stories were left unnoticed, this is not the case with Craig Wright’s copyrights on Bitcoin white paper. The idea that the copyright proves him to be a genuine creator of Bitcoin, aka Satoshi Nakamoto, was dismissed b the community as pure nonsense, but Bitcoin SV showed an eye-popping rally and even managed to retain the ground.

Binance Coin (BNB) is also one of the biggest winners of the week despite some controversy around the exchange security. Binance users experienced huge lags in on webpages that caused substantial losses for several cryptocurrency traders. However, this incident was brushed aside as minuscule. Instead, the market focused on Changpeng Zhao’s statements that abnormally high trading volumes caused delays. As a result, BNB gained over 34% on a week-on-week basis.

A lot was going on on regulatory front as the US Securities and Exchange Commission (SEC) postponed the decision on two pending Bitcoin ETF applications and received another one, from the US-based stock exchange  NYSE Arca. The SEC is master of kicking the can down the road, but eventually, it will have to decide whether to approve the requested crypto instrument and the corresponding change of listing rules or to reject it.

Meanwhile, the SEC is not the only regulator that is reluctant to clarify its position. The Russian parliament has been trying to pass the bill on digital assets for about two years, and it is still in the initial stages. Moreover, the lawmakers will have to postpone it once again as the FATF (Financial Action Task Force) requested to include the definition of cryptocurrencies in the law. This wait-and-see approach is quite understandable. On the one hand, the regulators are wary of digital money as they are considered too risky and vulnerable to cyber threats. On the other hand, they do not want to ban them out of fear to slow down innovation or cause an outflow of capital.

After a short-lived collapse towards $6,500 area at the end of the previous week, BItcoin returned to the area above $7,800. The sift recovery bodes well for Bitcoin bulls as it signals that there are plenty of buyers waiting for the chance to increase their long bets once the price retreats. However, a prolonged consolidation below $8,000 handle may spoil the short-term technical picture and trigger another leg down before a recovery wave.

All in all, we will need to see a sustainable move above $8,000 to claim that the recovery is resumed. Another local barrier is created by an upper boundary of 4-hour Bollinger Band and 38.2$ Fibo retracement daily on approach to $8,150. Once it is cleared, the upside may gain traction towards the recent high of $8,390 and proceed to $8,400. A sustainable move above this handle will open up the way towards $8,900 (an upper boundary of 1-day Bollinger Band) and $9,000. Considering an upward-looking Relative Strength Index on both daily and weekly charts, this scenario seems quite realistic.

On the downside, the first cryptocurrency is supported by $7,800-$7,750. A confluence of technical indicators, including SMA50 4-hour, may stop the downside correction. However, a sustainable move lower will trigger more sales towards $7,400 (SMA100, 4-hour and Thursday’s low). The strong barrier awaits bears on approach to psychological $7,000 with 23.6% Fibo retracement from a significant move from December 2017 high to December 2018 located on approach. Once it is cleared, the sell-off is likely to speed up with the next focus on an upper boundary of a weekly Bollinger Band ($6,750) and SMA100 weekly ($6,500).

The Forecast Poll of experts improved significantly since the previous week as expectations on a midterm and long term timeframes are bullish. All price estimations are well above $8,000 handle. 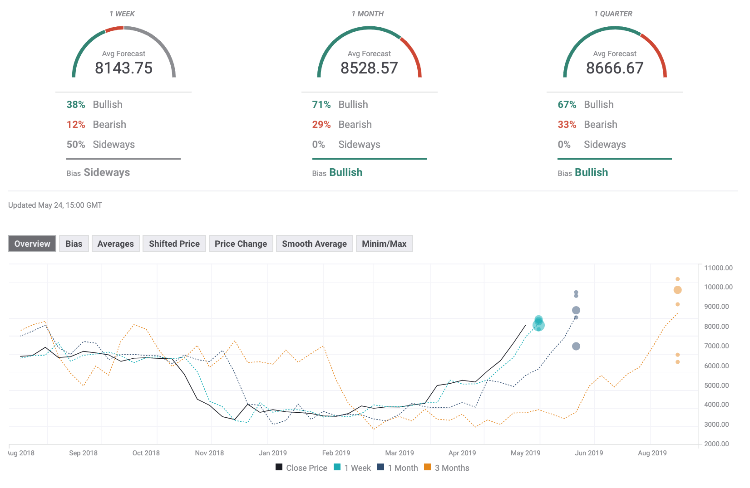 Fed's Barkin not convinced of use cases for...