We could reach the $12,000 level, an area that I think will be a great accumulation area for longer-term holders.

However, that does not necessarily mean that we are going to see Bitcoin take off. I just think that there is a lot less panic out there than there was just a few weeks ago. The $18,000 level has been rather supportive as of late, and I think that will continue to be the case going forward. However, I do also believe that eventually we will break through that level, and to be honest, I thought it was going to happen during this move.

Rallies at this point in time would be selling opportunities from everything I see, especially with 50-Day EMA sitting just above and shrinking. We would need to take out the $24,000 level to the upside for me to consider buying Bitcoin, because there is no fundamental reason for it to pick up at this point. The Bitcoin market is pretty far out on the risk appetite spectrum, so we need people to be willing to buy other things first before they even get involved in this market. Right now, it does not look like people were willing to take any significant amount of risk, and as long as that’s the case, Bitcoin traders will be waiting for the Federal Reserve to change its monetary policy. They look like they are nowhere near doing that, so I think we are still in the midst of a major “crypto winter” and would not be surprised at all to see this market break through the support and go looking to reach the $15,000 level.

After that, we could reach the $12,000 level, an area that I think will be a great accumulation area for longer-term holders. In fact, that’s my trading plan at the moment, letting Bitcoin collapse, so I can start picking up coins at lower levels. That being said, the volatility alone is keeping institutional money out and therefore a lot of the fire power is now gone. 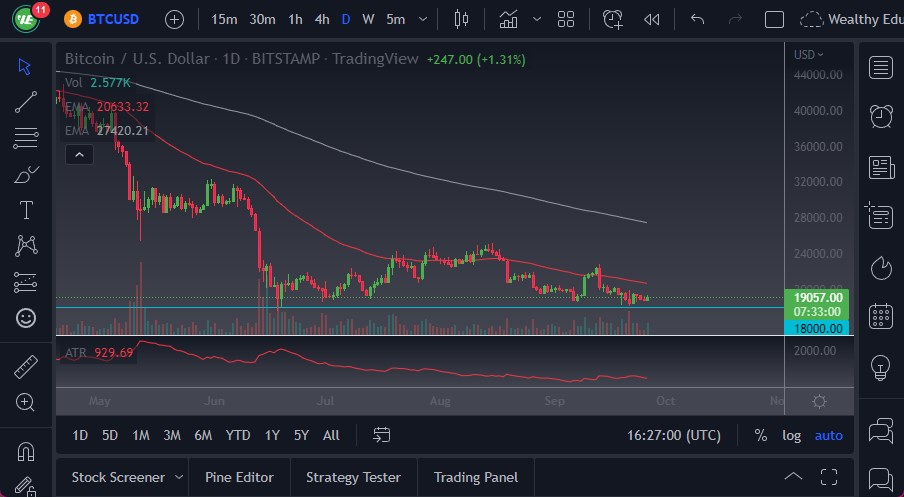 Ready to trade our BTC/USD trading predictions today? Here’s a list of some of the best crypto brokers to check out.

Bitcoin has popped back above USD17K – ForexLive

Bitcoin at Risk as Liquidity Dries Up

US won’t allow crypto to be used...