We probably have a rough couple of weeks ahead, and the volatility certainly looks as if it is going to pick up rather quickly.

The Bitcoin market fell rather hard during the trading session on Thursday, and what may have been somewhat thin volume, but at the end of the day it is something that has been needed for a while. Bitcoin has been a bit overdone as we started to approach the all-time highs again. Ultimately, this is a market that looks likely to have a bit of follow-through here, because after a candlestick like that, most of the time you will see continuation.

If you been following my analysis here at Daily Forex, you know that I have been warning that something like this was bound to happen. Bitcoin desperately needs some type of pullback to offer any type of value, and this unfortunately is going to be another scenario where people are probably going to get hurt again. The $18,000 level being broken was the first potential support level that has given way. The $16,000 level underneath is the next support level, but after this candlestick, it is very likely that short-term rallies will be sold into, because we should need to see some type of base building in order for people to be comfortable going long again. After this type of move we have seen, it makes sense that people who have seen the value of their assets skyrocket so easily that they would be more than willing to take profits.

Underneath, the 50 day EMA is down at the 14,350 level, so I think it makes quite a bit of sense that we may see support in that area. In fact, I would like to see the market go back down there before thinking about suggesting that should rally. Yes, I think we will get a short-term bounce, but these type of candlesticks rarely occur in a vacuum, so fading that or perhaps avoiding jumping back on the “hype train” is probably the best way going forward. Bitcoin has a long history of shooting straight up in the air and then falling apart. I think this is simply going to be another one of those scenarios. We probably have a rough couple of weeks ahead, and the volatility certainly looks as if it is going to pick up rather quickly. The $20,000 level of course continues offer a major psychological barrier, and it now looks as if it will continue to have people nervous. 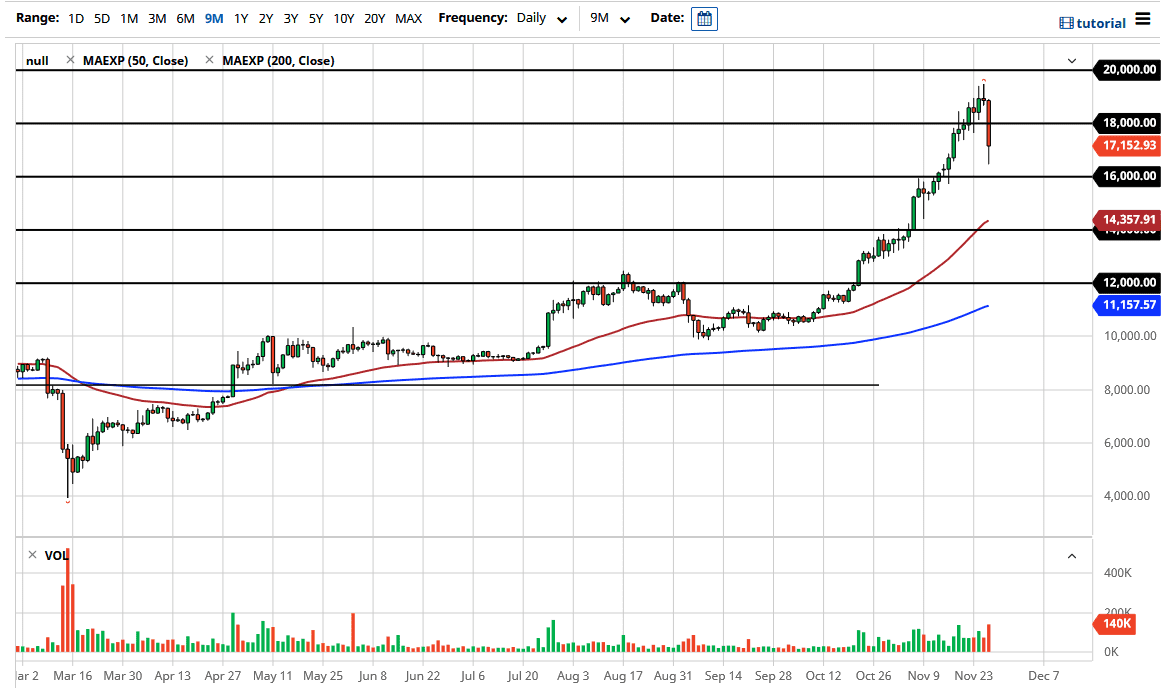 FinanceFeeds | Who is trading Bitcoin?