Bitcoin [BTC] has been the undoubted spearhead of most price hikes in the cryptocurrency market, the current one being no different. After putting a death knell to the much touted “altcoin season” following its April ascendance, the crypto-minority is looking to make a comeback.

As Bitcoin bumped the $8,800 price ceiling and took aim at the $9,000 mark, it soon dipped below and altcoins took charge. Led by the likes of the BTC-little brothers, Bitcoin Cash [BCH] and Bitcoin SV [BSV], XRP and the unlikely IOTA [MIOTA], the cryptocurrencies that hold $126 billion to Bitcoin’s $155 billion market cap are beginning to have lift-off.

Several market analysts are opining that altcoins trailing on the king coin’s coattails has ended, with the remaining cryptocurrencies making their mark. Under usual circumstances, a BTC price pump would stir the altcoin market into a source-less surge. However, at press time, Bitcoin was mounting a feeble 1.25 percent rise, sluggish at $8,700, while the altcoins were amassing price waves.

In light of this contrasting movement, several analysts have primed the altcoin market for a major breakout. DonAlt, the prominent cryptocurrency trader and analyst, charted XRP against the king coin to show bullish minority movement.

The chart showed a resistance of $0.000052, with the analyst stating that “If we’re in an altcoin bull market, this breaks out to the upside.”

Following XRP’s massive rise vis-à-vis Bitcoin from 0300-0700 UTC on 30 May, amassing four consecutive strong green candlesticks in the process, the analyst stated that altcoins, or XRP at least, has experienced a “lift-off.” His tweet following the surge read,

“Ladies and gentleman, we have liftoff.
My XRP family – I’m happy you’ve chosen to travel with Duck Airlines today.
Fasten your seatbelt and enjoy your flight.”

It should be noted that the altcoin rise is also fueled by Bitcoin SV for reasons which many in the crypto-community claim are ‘fraudulent.’ The price pump is owed to a transfer of 50,000 BTCs from the “biggest BTC wallet to Binance,” by Craig S Wright. Additionally, the fact that BSV has been delisted by several major exchanges, leading to the ease of fudging volumes, the price rise did not get much traction.

Adamant Capital’s Tuur Demeester also voiced an interesting pictorial perspective for the altcoin surge, albeit fueled by Bitcoin bulls. Likening this concept to a ‘pressure valve,’ Demeester stated that when Bitcoin “heats up,” altcoins feel the flame. His tweet stated,

“The current altcoin rally imo is explained by the “pressure valve” concept I developed in 2013. When Bitcoin heats up, eventually speculators cycle into altcoins as a way to enhance returns.” 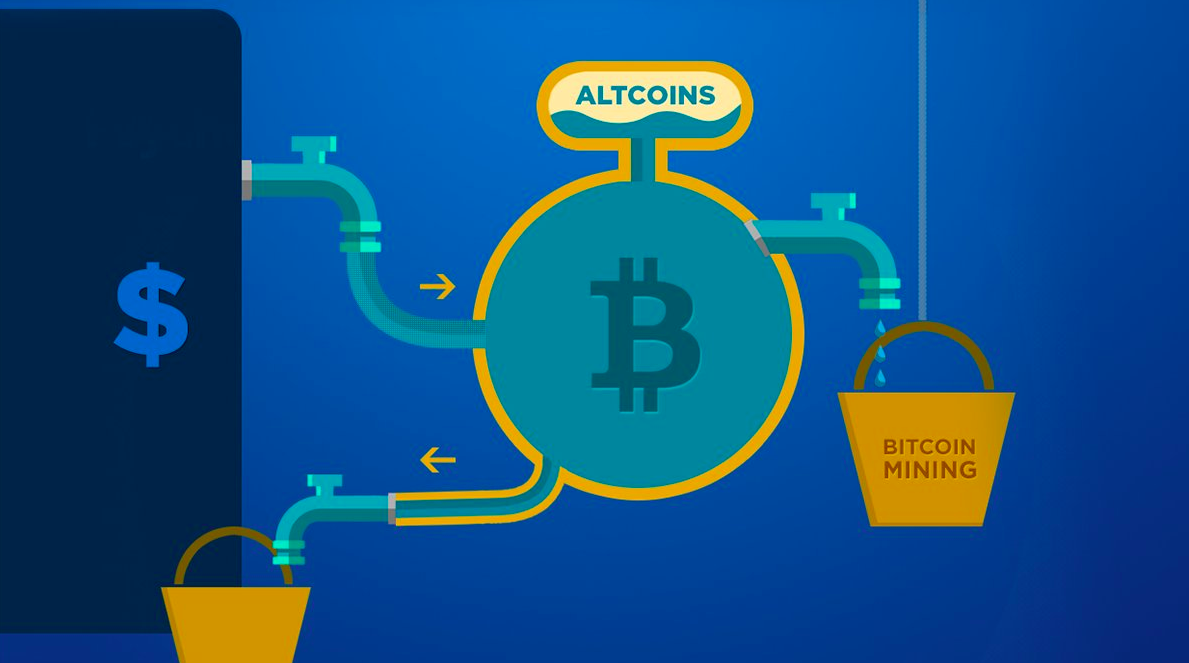 Going by the “pressure valve,” the Dollar flowing into Bitcoin will first seep into USDT, portrayed by the yellow bucket on the left. Bitcoin miners then receive the next price handout and once the BTC valve is full, the altcoins see water. Given Bitcoin has been seeing wave after wave, or rather drop after drop of positive price pressure, the altcoins are now feeling the pressure.

5 Crypto-Linked Stocks to Buy, an Altcoin to...

Cardano ADA Is an Altcoin You Really Should...

Bitcoin’s Retrace Could Inject Fuel into the...

An idiot-proof guide to buying bitcoin and...