Home Altcoin But why is altcoin trading concentrated mostly in East Asia?
Altcoin

But why is altcoin trading concentrated mostly in East Asia?

Lately altcoins have been the talk of the town. From ICOs to defi tokens, altcoins are plenty in number and perhaps Asian traders are to thank for that. FTX is well-known for its listing of new tokens and so is Binance, which listed Nexus Mutual token earlier today [NXM]. (Any common thread you recognize there?)

The reason altcoins are grabbing attention is mostly due to East Asian traders’ affinity towards these coins. According to a recent Chainalysis report it was noted that East Asia is the world’s largest cryptocurrency market in the world and contributes about 31% of all the cryptocurrency transacted in the last 12 months.

“East Asia-based addresses have received $107 billion worth of cryptocurrency in the last 12 months, which is 77% more than Western Europe, the second-highest receiving region.”

Not just that, liquidity arising out of this region is so high that it is either the largest or second-largest counterparty for every other region. 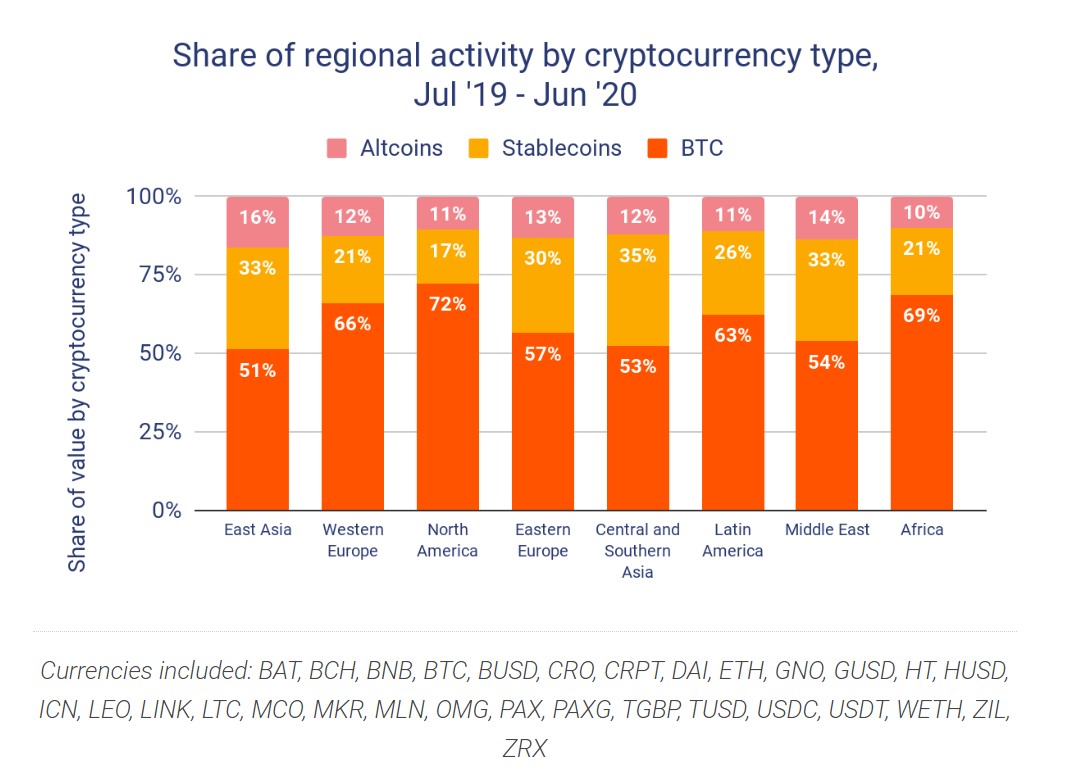 East Asian traders allocate a 16% of the portfolio to trading altcoins while 33% for stablecoins and the rest/majority is of cource allocated to bitcoin. The same portfolio can be seen with traders from the Middle East as well.

Another interesting observation is the frequency of trading. Again, East Asia dominates this list. For this research, trading intensity was calculated by considering the number of times each coin deposited on an exchange was traded within the exchange before exiting.

This metric showed that,

“The East Asian exchanges have a trade intensity between 1.4x and 3.8x higher than those catering to North America in any given month over the last year, showing that East Asia cryptocurrency users trade more frequently than those in North America, who tend to buy and hold.”

The main reason behind this can be attributed to the concentration of mining industry in East Asia. About 65% of all bitcoin hash rate comes from China and if this wasn’t enough, the mining manufacturers are also concentrated in China. Hence, most minted bitcoins are first sent to Asian exchanges.

Perhaps, a small reason for this could be due to the PlusToken scam that netted over $2 billion worth of cryptocurrency from millions of victims, concentrated mainly in Asia. Other huge scams are also concentrated in China, Korea, etc, which might also explain the trading volume and on-chain transactions.

While East Asia is still the largest contributor to crypto volume, its overall activity has declined since October 2019 and could be directly attributed to the negative sentiment arising due to these scams.

The altcoins are really starting to pop

OmiseGO, fastest growing altcoin, up 49% in past...

Analyst: Chainlink Is Another Altcoin Bubble as Price...