Bitcoin Price Analysis: Is BTC/USD still in the buy zone heading into the May halving?

The weekend session has been stable for most cryptocurrencies especially for Bitcoin. The bulls desire to close the week above $7,000 materialized with an opening value of $7,129. BTC/USD has remained in the green throughout the Asian session on Monday. At the time of writing, the largest digital asset is trading at $7,160 after adding a subtle 0.46% to its value on the day. The existing trend is bullish, although the low volatility suggest that very minor upwards movements are expected in the current session.

Bitcoin is grinding closer to the most-anticipated event not only for the network but also for the entire cryptocurrency industry. The May 2020 block reward halving happens to be third in the history of Bitcoin. Reward halving assists in controlling inflation of the asset as well as achieving its 21 million maximum supply. The previous two events were historically significant for BTC as they introduced volatility, reduced supply an increased demand; the perfect ingredients for a bull run.

Meanwhile, Bitcoin corrected from levels under $6,500 last week to highs close to $7,300. The asset has also sustained gains above $7,000. An Analyst with Brave new Coin, Josh Olszewicz believes that Bitcoin is almost entering a buy zone, which occurs once a quarter. According to the analyst, technically Bitcoin could soon climb above the Ichimoku Cloud for the first time in five weeks, giving way for another lift-off from the current levels above $7,000. 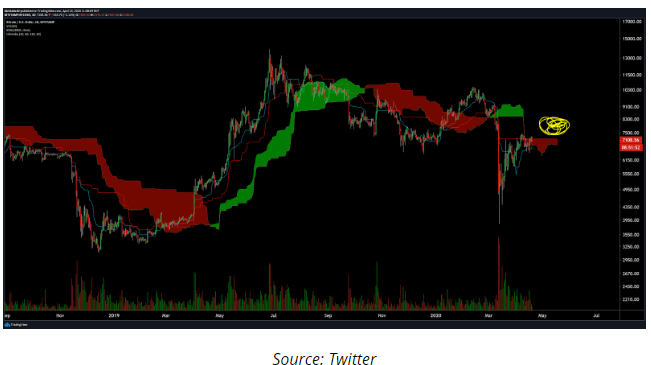 Bitcoin price is stable above the moving averages where the 50 SMA and the 100 SMA have easily turned into support areas. The RSI is horizontal at 57 after retreating from highs around 70. The price is largely in the hands of the bulls as emphasized by the MACD. On the downside, other support areas include the ascending trendline, $7,000, $6,800 as well as $7,800. On the upside, a break above $7,200 resistance could result in boosted price movements targeting $7,500 in the near term.

Hackers steal $25 million worth of cryptocurrency from Uniswap and Lendf.me

This Technical Sign Sent Bitcoin 250% Higher In 2019. It’s About to Appear Again

Paypal to allow users to buy, hold and...

Futures Traders Aren’t as Bullish This Time Around...

How Stocks, Bitcoin and Other Investments Fare in...