Bitcoin & Litecoin halving: Is a new all-time high in store for LTC? – Chepicap

The majority of the crypto community is currently waiting, in anticipation of what the quadrennial Bitcoin halving will do for price action. But with over 357 days to go until the event, investors still have some time on their hands… However, there is another halving event coming up, this time for the silver to Bitcoins gold, Litecoin (LTC).

Litecoin’s halving event is a mere 67 days away, set to take place on the 6th of August 2019, and we’re already seeing the tell-tale signs that the upcoming halving could provide a catalyst for Litecoin, with LTC citing a year to date increase of just over 270%.

What is a “Halving”?

In order to avoid hyperinflation, Bitcoin’s creator Satoshi Nakamoto, instilled BTC with its own quasi-monetary policy to ensure that its circulating supply was limited and inflation was kept under control. This policy included the requirement to half the mining reward for every 210,000 blocks mined (approximately every four years) until all blocks are mined.

What effect has Bitcoin’s halving events had on price?

Previous halving events have provided some major price hikes for Bitcoin, for example, Bitcoin’s price one year before the first halving was $2.55, one year after it was $1037. Similarly, the price before the 2nd halving was $268, and after it stood at $2,525.

While it’s impossible to accurately predict what might happen to Bitcoin’s price come May 2020, a few analysts have taken a fair swing at forcasting. One analyst even suggested a price point as high as $140K for the next Bitcoin halving, based upon historical halving cycles.

The analyst stated that Bitcoin goes through several phases running up to a halving, including a bull market, bear market, an accumulation, expansion, and reaccumulation before circling around to a bull market once again: 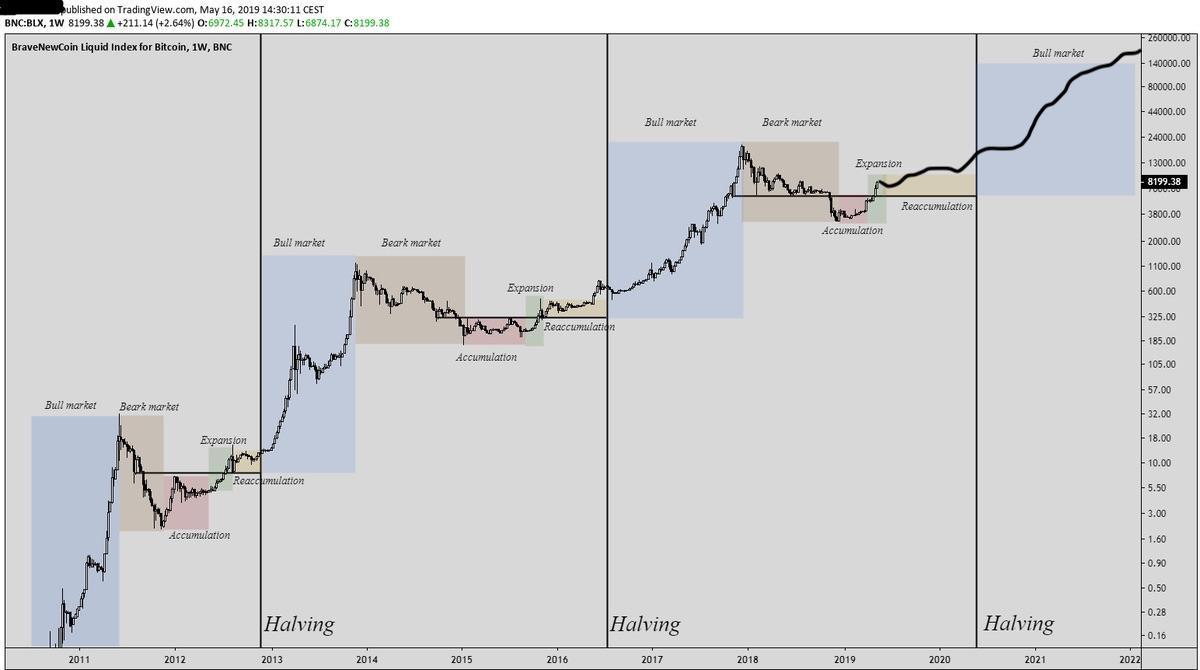 How does a halving work in principle?

While there are a few theories as to why an assets price would increase around its halving event, the propagating theory is, essentially, the principle of supply and demand.

Bitcoin, for example, has gone through 2 reward halving’s, with the third coming up in May next year, meaning the current reward for each block mined stands at 12.5 BTC per block, after May it’ll get reduced to 6.25 BTC per block.

In essence, the less BTC being produced, the more valuable Bitcoin is thanks to its reinvigorated scarcity.

How does this play out in theory?

It’s mainly down to the miners. Every month, around 4400 blocks are mined, the block reward, we know, is 12.5 BTC, and Bitcoin current price is around $8700 dollars.

So, presently, there are about $478 million dollars in value created for miners per month, however, after the halving – and with the reward reduced to just 6.25 BTC- the value produced per month is reduced to just $239 million.

The idea is, that miners won’t stand for this, and thus will either stop mining BTC as it becomes less profitable or continue and refuse to sell for the market price aka HODLing.

All of this also applies to Litecoin, which has one undergone one halving so far, seeing its mining reward reduced from 50 to 25 LTC per block. The upcoming event will see a further reward reduction to 12.5 LTC.

Unfortunately for Litecoin historical representation shows that LTC may not follow Bitcoin halving trend exactly, while anticipation of a halving peaked LTC’s price point from $1.30 to $8.90 in 2014, the actual event was rather lackluster, with its price slipping to around $2.95, shortly after the halving.

With not much more than Bitcoin’s precedent and one other instance of an LTC halving to go by, it’s hard to make any such price prediction for LTC.

However, one crypto analyst, known as Moon overlord, had a go…

Moon overlord relayed that LTC bottomed 200 days before its halving in 2015, and peaked 2 years after the event in 2017, suggesting that if this course of action is followed again, we could see another peak by 2021.

The #Litecoin halving is quickly approaching

LTC peaked 2+ years after it’s halving, If it follows a similar path this time the peak will be in 2021 pic.twitter.com/UbsQdEmhnN

We can take this a little further, as long as you don’t mind a load of speculation… strap in.

Yes, we are fully aware that that is mental, still, we can all dream, can’t we?

Regardless of the lack of data, one thing is for certain, the principles of supply and demand and scarcity often have a direct correlation to price.

Using the same calculation as we did with BTC for LTC:

Litecoin miners net a total of $49 million dollars per month, with the reward reduction that’ll come to around $24 million per month, leaving a lot to be desired for LTC miners and thus potentially running up the price a fair amount.

So, what do you think will happen in the lead up to Litecoin’s halvening? Will we see a spike in price? Is $35k per LTC completely insane? Let us know your thoughts in the comments!

Chepicap is now LIVE in Blockfolio! This is how you receive our latest news in your portfolio tracker!

Monero Price Analysis: Despite The Volatility, XMR is Holding the Bullish Trend And Will Soon Cross $100 Mark – CryptoNewsZ