Editor’s Note: Get caught up in
minutes with our speedy summary of today’s must-read news stories and expert
opinions that moved the precious metals and financial markets. Sign up here!

The important distinction that BI draws in its August report is that bitcoin is going through a consolidating bull market while gold is just taking off.

“On an annual-range basis, bitcoin is `meh’ vs. gold,” BI senior commodity strategist Mike McGlone said in the report published in the beginning of the month. “Bitcoin looks like a consolidating bull market, while gold is flirting with six-year highs.”

The cryptocurrency is estimated to end its consolidation period higher but its price action in 2019 has been “nothing spectacular,” described McGlone.

“This year’s range is within 2018’s, which didn’t exceed the 2017 high and low. Favorable technical and fundamental conditions indicate to us that Bitcoin should exit its consolidation period higher,” he wrote.

In terms of some outside factors, Facebook’s future Libra cryptocurrency works in favor of bitcoin, whichever way it works out for the giant tech company, according to BI.

“The announcement of Facebook’s Libra coin is a potential win-win for advancing the Bitcoin price. If Libra succeeds, it adds legitimacy to the future of global digital payments, improving Bitcoin’s uniqueness as a form of gold. If Libra fails, Bitcoin gains luster as the go-to store-of-value among all cryptos,” McGlone pointed out. 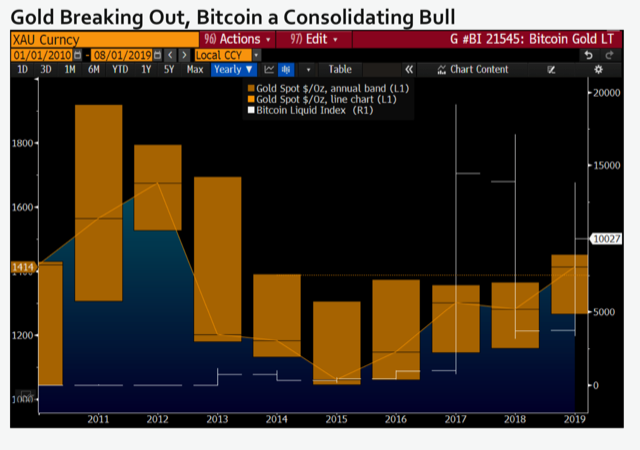 But, in gold’s case McGlone sees the metal continuing its bull run this year with the mission to revisit resistance at $1,700 an ounce, last seen in 2013, McGlone highlighted. And gold is not that far off the mark now, surprising the markets with a surge above $1,500 an ounce this week.

“Gold’s advance appears to have among the strongest foundations,” McGlone said. “A potential increase in hedge fund positions supports our view that gold’s initial mission is revisiting resistance near 2013’s peak at $1,700 an ounce … Hedge funds’ net-long futures positions are a bit extended, but indicate that gold is in the early days of a bull market.”

An attempted heist at Coinbase was scary good, even though it failed – MIT Technology Review

A record $3.7 billion in Bitcoin options are...

No, Bitcoin Is Not in a Bubble

Bitcoin Crash Is Excellent Opportunity to Buy the...