If you think the price of Bitcoin will rise over the coming months, you can buy some through any good Bitcoin broker. If you live in the United States, eToro would be the correct choice from this list.

Recent years have seen investors and traders fret over price forecasts concerning Bitcoin, as the price of the digital asset has been very unstable and extremely challenging to forecast. After a year of market pullback in 2018, Bitcoin has staged a few bullish runs in 2019, followed by a bear run. In a bid to predict the price of Bitcoin using technical and fundamental analysis, I will make a full use of the repetitive nature of Bitcoin’s historical patterns which are mostly reflections of impending events and buyers’ behavior to make a Bitcoin price prediction for 2020.

In June 2019, Bitcoin recorded its yearly high after hitting close to $14,000. Not being able to break its resistant point, Bitcoin went into a free fall as the supply driven by high price per coin overpowered the purchasing power of buyers. The descent of the Bitcoin price was saved by a support point created by the buyers’ response to the fall in price, holding the price above about $10,000 until September, when the price began to fall to even lower four-figure levels, where it has remained. My Bitcoin 2020 prediction is a positive one, but 2021 will be even more so.

Before going further, it is important to say that the Bitcoin price will make a further fall in the short term as a key support line has recently been broken, and unless the price is held by a concentration of buyers further down the price curve, the price may touch close to $6,500 in the short term if the $7,000 support line is broken, make a rebound into the $7,500 and $8,000 price zone and then head back above $10,000 over the medium term. After this, I expect the price will consolidate for a while before going on to break its all-time high in 2021 after the Bitcoin halving 2020 event which will occur in May 2020. The reasoning for these predictions will be explained below. 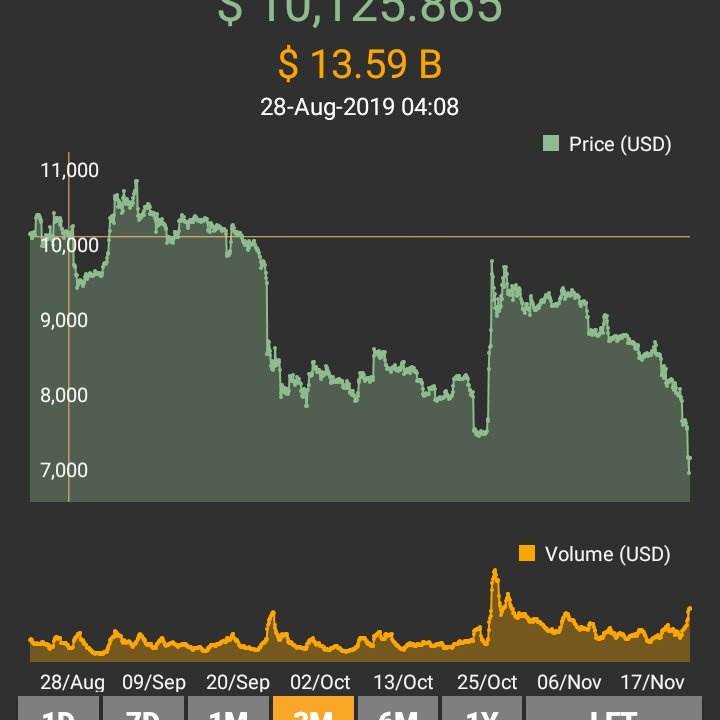 In the above price chart, Bitcoin found a key support point of $10,100 after it took a strong fall from its yearly high. On 22nd August 2019, the price pegged at a support point of $10,100 after failing to break the resistance at $10,300. The price then fell to peg at $10,100 once again on 25th August, took a rebound to a little above its resistance point and pegged at its support point again on 28th August. At this point, the supply had overpowered the demand causing Bitcoin to break its support point to fall as low as $9,400 on 29th August. At that price, buyers bought more of the asset to send the price above its previous point to trade around $10,800 on 6th September 2019. Bitcoin found another key support point at $7800 on 30th September, 7th October, and 24th October as it struggled to surpass its resistance price of $8,300. Bitcoin then rose sharply to break this resistance, trading at $9,600 on 28th October 2019, and between then and 8th November 2019, it found a support point at $9,200. This support point was broken, as was the round number of $8000. The price continued to move lower, and at the time of writing, the low for 2019 has been made earlier in the week just above $6,500.

Bitcoin price movement has seemed to follow a predictable trend over the last three months. The price touches its support line four consecutive times, breaks it and takes a deep fall before making a rebound above or below its previous support line. In most cases, typical chart analysis fails as it ignores the real interaction that goes on in the market. I think Bitcoin will fall in the short-term, but will Bitcoin rise again in 2020? I think the answer is yes.

Bitcoin Will Fall Over the Short Term

It is always impossible to predict the price of Bitcoin without considering its price determinants. Over the years, the price of Bitcoin has been affected by a number of determinants with the major known factors being government control, anticipation of future increase or decrease in price due to an impending event, demand, and supply which is mostly affected by some of the determinants, and media speculation. One of the most dangerous determinants among them is government control, as this seems to affect all other factors including media speculation and demand and supply.

In 2018, after Bitcoin had recorded its all-time high, the Chinese government began a massive crackdown on cryptocurrency exchanges, causing speculations of price fall in the media, and in return, forcing buyers to leave the market. This affected the price massively to take its value down to as low as almost $3,000.

Before the end of 2019, the price of Bitcoin will fall even lower, beyond $6,500, due to another crackdown having been launched by China, unless a stronger determinant like the bullish speculation surrounding the Bitcoin 2020 halving event overpowers this fear. 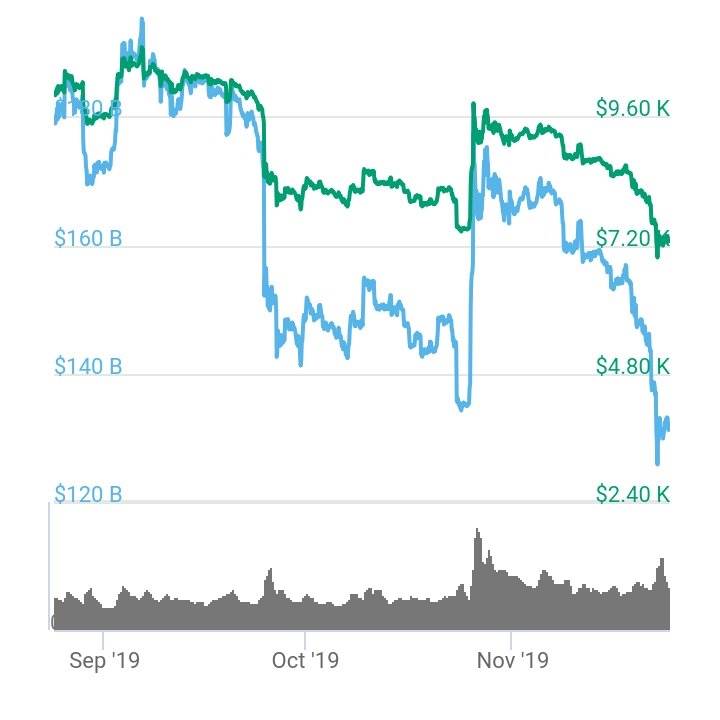 The price chart signifies a bullish move is likely in the first quarter of 2020, after support is found somewhere between $5,000 and $6,000.The blue line represents market capitalization while the green line represents price.

The price chart shows that Bitcoin is forming an interesting pattern resembling a “cup and handle” characterized by a deep fall in price, followed by consolidation and a finally subsequent bullish run. It is obvious that the handle which signifies a slight or steep fall at the right range of the formation is being formed and should be followed by a bullish run over the coming months in the first part of 2020. The bullish move may surpass the recent 3-month high close to $10,000. It is worth noting that this formation can take about 6 months or more to complete, so bulls will need to show patience. In the short term, Bitcoin is likely to continue its bearish momentum to reach $6,000 or even $5,000 quickly, possibly even before the start of 2020. However, the future of Bitcoin looks bright over the longer term. Is Bitcoin a good investment? Bitcoin is always a good investment and buying it at the relatively low current price is the best decision to make.

Predicting the future of Bitcoin with charts and patterns can be a promising way to succeed as in trading Bitcoin. However, technical analysis can be overpowered in this unusual asset by an event which carries much power and can cause a strong change in demand. In May 2020, Bitcoin is undertaking a halving event that is traditionally known for its positive effect on the market. Bitcoin halving is the division of the block mining reward by half, making mining a more expensive undertaking. This leads to a reduction in supply in relation to the increase in demand, which logically should cause a price spike.

The price of Bitcoin has increased in recent years every six months before a Bitcoin halving event, and in each case has gone on to overtake its all-time high price within a year of the halving event. A summary of the recent halving history is compiled in the table below:

From the table, it is obvious that the Bitcoin price has seemed to act predictably in the few months before a Bitcoin halving and over a year after the event. Prior to the Bitcoin price surge from $4 to $12 in March and November 2012, the price had crashed down to less than a dollar after making an initial attempt to remain in the single digit price zone. 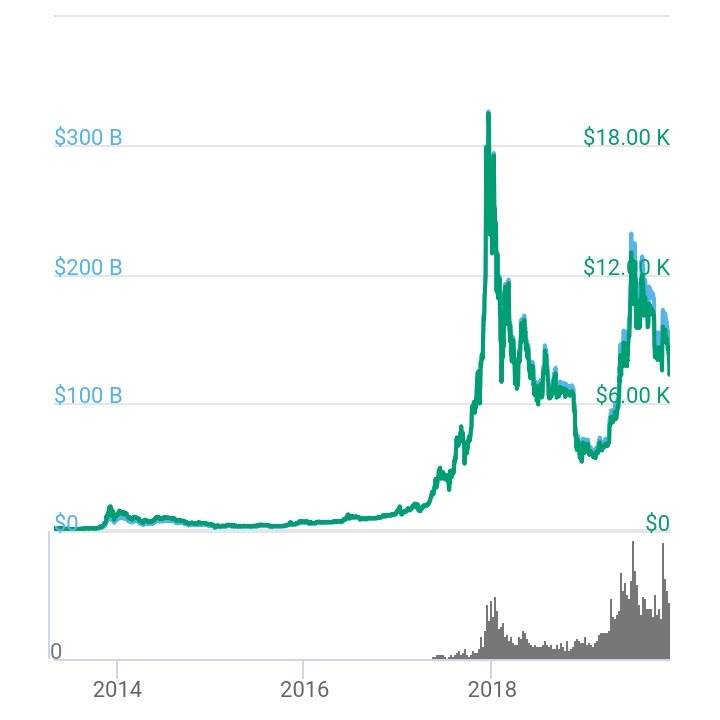 Like the 2017 Bitcoin bull run, the price had crashed down multiple times within some months or a year before the event. The price remained low for a while before making a sharp rise as shown within the above price chart.

Based on the previous price data, the Bitcoin price is on the verge of staging its first bull run before the event in 2020, and this may possibly start sometime in late December 2019 or early January 2020. The Bitcoin price should slowly rise back into the $10,000 price zone by March 2020 and possibly trade around $13,000 by May 2020 as the price surges during this period should tend to be staged gradually.

It is worth noting that the percentage change in price during and after the event may not necessarily be the same as the previous percentage change depending on several factors as well as the current value of the asset. The 2012 event led to a massive change in price compared to the 2016 event, and the 2020 event may possibly cause a lesser change in price compared to the 2016 event. I predict that the Bitcoin price may not overtake its all time high in 2020. The price may surge but at a slower pace like the price movement few months after the event in 2016. By December 2020, the Bitcoin price may trade as high as $17,000 and as low as $15,000 when we consider the price movement after the first six month of the event. In 2021, Bitcoin will possibly trade above its all-time high and push close to $30,000.

The setting of the price by the invisible forces of the market may cause Bitcoin to trade around $30,000 in 2021 as the reduction of mining rewards will leave Bitcoin mining in the hands of a few who enjoy free electricity and incur less cost and make enough profit. The demand may overtake supply due to an anticipation of the future price increase. The activities of Bitcoin whales (suspected to be one of the reasons that pushed the Bitcoin price high after the halving event and later cause a market pull back after the recording of a new all-time high) may cause the Bitcoin price to even reach $40,000 in 2021.

Over the past few days, crypto assets — from Bitcoin and Ethereum to Dogecoin …

SAN FRANCISCO — The last few months have not been good for Bitcoin. The …