At the start of June 2019, reports emerged that Binance DEX’s website was blocking users with IP addresses from 29 countries. This news immediately caused confusion with some commentators, using it as an opportunity to reaffirm their stance that Binance DEX is not truly a decentralized exchange (DEX).

However, as it turned out, the initial reports were somewhat inaccurate, as the geoblocking only applied to Binance.org — the website for the DEX platform. Traders could still access the DEX via some supported wallet apps, bypassing the need to go through the website to reach the DEX service.

Responding to the issue, Changpeng Zhao, the CEO of Binance, advocated for the use of virtual private networks (VPNs) to bypass such restrictions. However, some commentators say using VPNs increases the burden for traders who might prefer to utilize other platforms that do not come with such encumbrances. Also, there is the little matter of VPNs being against the Binance DEX terms of service (ToS).

From the perspective of United States-based traders, being geoblocked from Binance.org might see them move to U.S.-regulated trading avenues, which seem to be shrinking by that day. Back in May 2019, Poloniex had to block trading for its U.S. customers on nine cryptocurrency tokens, including ardor (ARDR), augur (REP) and NXT.

Traders from the U.S. and 28 other countries will, as of July 1, 2019, be unable to access the Binance DEX platform via its website — Binance.org. This restriction, according to a pop-up that appears on the website, covers users whose IP addresses are from the affected countries.

With the impending restriction, Binance has advised traders in the 29 countries to consider using wallet apps that support access to the DEX without having to go through the website. These wallets include Trust Wallet, Coinomi, Atomic Wallet and the Ledger hardware wallet, to mention a few.

While the company does offer alternatives to traders in the geofenced countries, it provides yet another worry for traders in jurisdictions like the U.S., where trading avenues seem to be shrinking.

Related Story: Crypto Exchange Bittrex to Block US Users From Trading in 32 Cryptos

The lack of clarity from U.S. regulators as to whether ICO tokens are to be considered as securities means that exchanges listing such tokens might have to blacklist American traders. Already, the Poloniex exchange announced back in May 2019 that U.S. traders would no longer be able to trade nine tokens on its platform.

Announcing via Twitter on June 7, 2019, Bittrex, another cryptocurrency exchange, said it would be geofencing as many 32 assets from its U.S. customer base. The Seattle-based platform also identified regulatory uncertainties in the country as the reason for its decision.

Just like Bittrex, it seems Binance is also seeing the results of trying to offer services to U.S.-based traders in this current regulatory landscape. As part of its Twitter announcement, Bittrex declared:

“International markets provide the greatest opportunity for growth and the lowest risk of regulatory uncertainty. We will continue to advocate for laws and regulations that foster innovation.” 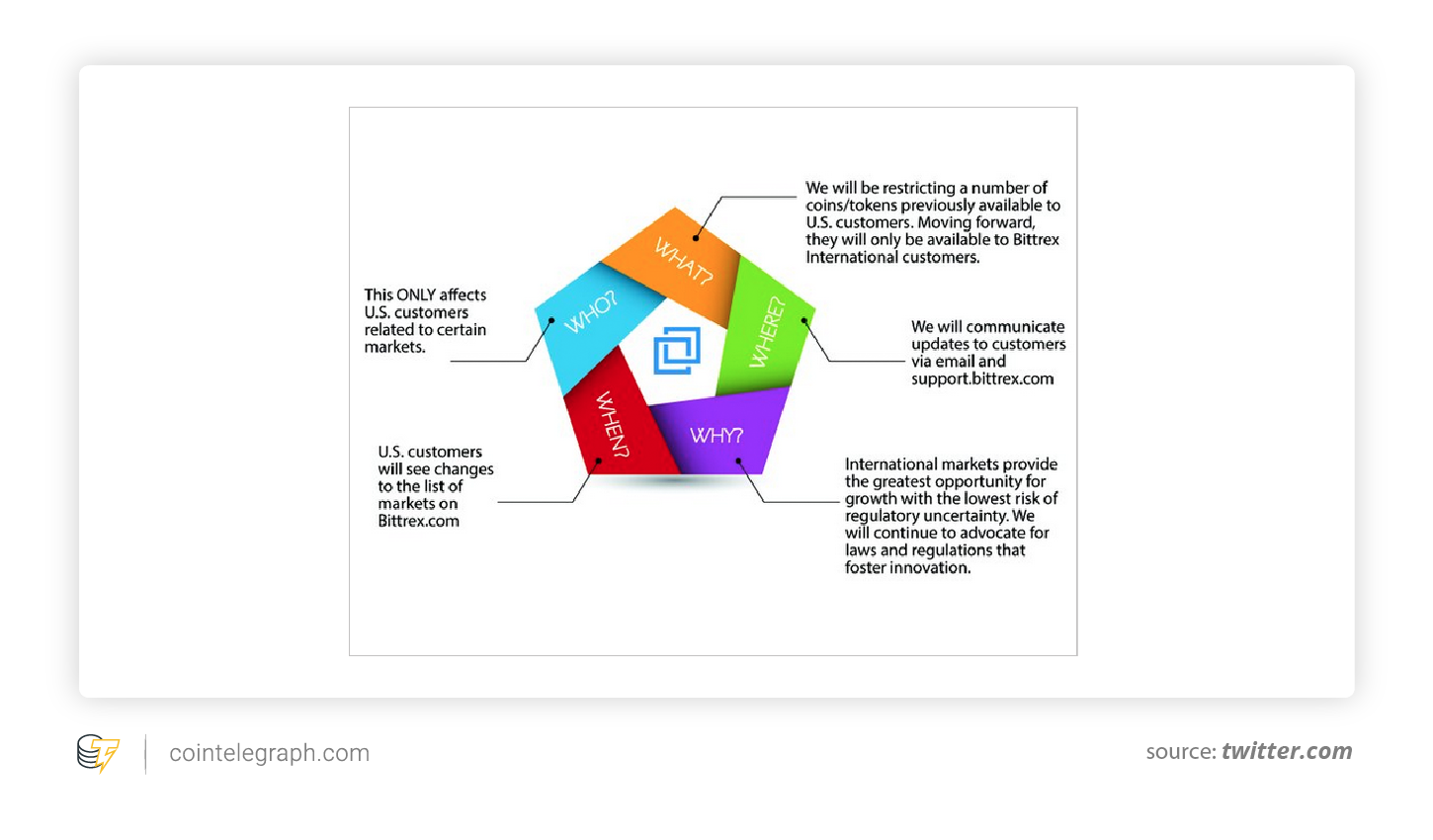 Despite concerted efforts from many stakeholders, the country’s Securities and Exchange Commission (SEC) hasn’t loosened its strict stance on what constitutes a security with regard to cryptocurrencies. Some members of the country’s legislature are currently working on the modalities for a bill to provide an exemption for digital tokens from securities regulation.

In the meantime, traders from the U.S. and all the other affected countries would have to try their hands on the suggested wallets. Some may yet switch to U.S.-regulated platforms, even if it means having fewer trading options.

The other alternative for such traders is to use a VPN service to bypass IP restrictions. Even Zhao encouraged users to consider this, calling them a necessity in a tweet published on June 3, 2019:

VPNs is a necessity, not optional.

VPNs allow users to establish secure connections to a server, which can be useful for shielding one’s digital footprint from prying eyes. However, the most popular use case for VPNs is arguably to bypass geoblocked websites and other forms of internet censorship.

Thus, it doesn’t appear out of order to consider using VPNs to circumvent such restrictions as imposed by Binance. However, there is a slight wrinkle, as the use of VPNs is prohibited in the Binance DEX ToS. Article 6.8 and 6.9 of the document under section 6, which deals with “prohibited uses,” reads:

“You may not: […] where you are a resident or national of a Prohibited Jurisdiction or a U.S. Person, access the Site or any Services using any virtual private network, proxy service, or any other third-party service, network, or product with the intent of disguising your IP address or location.”

The Binance DEX document goes on to state that if the platform determines that a user has flouted such a rule, it reserve the right to address such prohibited use. So, why then would the likes of Zhao encourage the use of VPNs when they are clearly forbidden by the ToS?

Cointelegraph reached out to Binance for clarification on the matter but is yet to receive any response as of press time.

What happens when traders in the 29 countries who prefer to use VPNs rather than access the DEX via supported wallet apps begin doing so? Would they face any negative repercussions in the form of account suspensions or bans?

Perhaps traders from the affected countries would do well to tread cautiously in this regard and maybe stick with platforms regulated in the country, or avail themselves by using one of the suggested wallet apps.

Examining the ToS document also throws up some other issues, chief of which lies in article 2 — “liquidity and listing risk” under the “risk disclosure” portion. This particular portion of the ToS reads:

“Markets for Digital Tokens have varying degrees of liquidity. Some are quite liquid while others may be thinner. Thin markets can amplify volatility. There is never a guarantee that there will be an active market for one to sell, buy, or trade Digital Tokens or products derived from or ancillary to them. Furthermore, any market for tokens may abruptly appear and vanish. Binance makes no representations or warranties about whether a Digital Token that may be traded on or through the Site may be traded on or through the Site any point in the future, if at all. Any Digital Token is subject to delisting without notice or consent.”

The most important part from this is the final sentence, which says tokens can be “delisted without notice or consent.” Such a proviso hardly signals decentralization and calls into question the validity of the assertion that Binance DEX is truly decentralized.

Cryptocurrency purists will, however, continue to advocate for decentralized exchanges for a number of reasons, such as their robust security and censorship resistance. A well-realized DEX network could also result in far cheaper trading than currently offered by their centralized counterparts due to the absence of any third party.

Related Story: What Crypto Exchanges Do to Comply With KYC, AML and CFT Regulations

One other major pain point of cryptocurrency trading is the increasing insistence on Know Your Customer (KYC) and Anti-Money Laundering (AML) protocols by regulators in different jurisdictions, which Binance has seemingly been incorporating on its DEX platform. However, as DEX platforms usually do not support conversions to fiat currency, it should not be the case that such a proviso is relevant to their operations.

Bitcoin-mining stocks sink as the cryptocurrency struggles to...

Bitcoin vs Libra: Here are the key...