The Tie put out a tweet outlining the performance and sentiment surrounding Bitcoin, Ethereum, XRP, and Binance Coin, recently. Bitcoin, the cryptocurrency which started it all, had an amazing start to 2019, considering the prolonged bear market it was in before the dawn of the new year.

According to The Tie:

However, considering the dominance of Bitcoin in the market, it reached a peak of 63% on May 14, but reduced thereafter. Bitcoin’s dominance rose drastically by 18.52% in over 133 days [4.5 months]. The price of Bitcoin started its parabolic ascent on April 1, and there was no holding for Bitcoin when it rose from approximately $4,100 to $8,000 in under 55 days.

The second largest cryptocurrency, Ethereum’s market cap dominance decreased from 22% to 10.05%, The Tie tweeted. It also noted that Ethereum’s tweet volume had seen an overall increase and was at 13%. 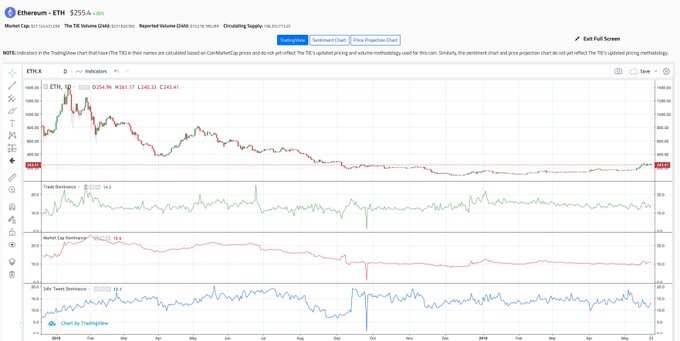 Unlike Bitcoin, Ethereum’s price and sentiment are both collapsing. The price of Ethereum has collapsed by 3.1% in the 24-hour timeframe.

XRP, once regarded as the coin that would overtake Bitcoin by their community, was the worst performer in comparison to Bitcoin or Ethereum. The Tie tweeted:

In addition, The Tie outlined how Binance Coin was the best performing asset due to “its share of the overall crypto market cap increase 9x as the coin has more than tripled in value”. Moreover, it also mentioned that BNB’s overall Twitter volume increased by more than 10x and the trading volume increased by 3.5x.

This entity could be stopping Ethereum from...

Building a Future on Ethereum at Canadian...