Bitcoin continued to correct following its recent 2019 high of $13,970 while there appears to be no respite for altcoins with the majority continuing to decline in price.

Bitcoin managed to hit a new yearly high of $13,970 on Binance yesterday, before slightly correcting. Currently sitting at $12,500. While the decline in price would have sparked a potential surge in altcoin pricing as traders begin selling-off Bitcoin to move into alts, that does not appear to be the case.

Altcoins continued to slide as Bitcoin dropped 2% on the day, major caps such as EOS, Litecoin and Bitcoin SV saw the biggest declines in price. 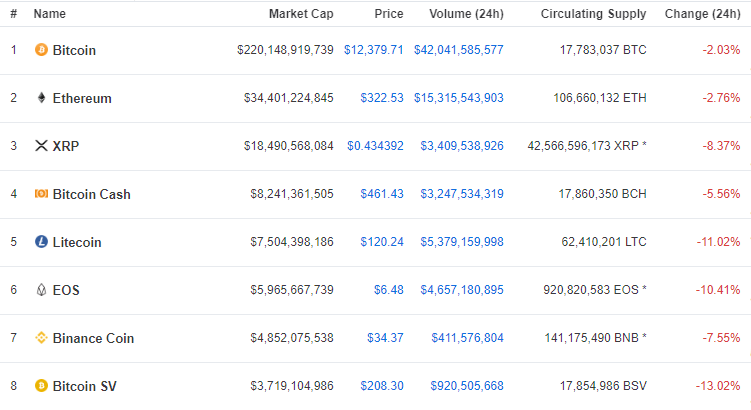 While it appears traders are not moving back into alts just yet, it appears Bitcoin’s dominance has climbed to 63% and continues to reach 2019 highs in terms of dominance over the market.

Bitcoin continues to look weak following the recent parabolic move, and traders could be looking to move to lower cap coins before altcoins see any major recovery. Everyone will be keeping tabs on what Bitcoin does over the next 24 hours in terms of dominance and how altcoins are being affected, but we are likely to see traders begin moving funds back into altcoins this week if Bitcoin does not see another bullish surge in price.

– We could be headed for a small correction and #alts may bounce nicely across the board pic.twitter.com/Vg5W9brQOm

Bitcoin to $20K FAST, but only if THIS happens! $10K CROSSROAD Subscribe to the Chepicap YouTube Channel for more videos!

Altseason coming, but not here yet… This is what we need to see first!


Roubini on BitMex: “95 percent of all bitcoin transactions are fake”

How to buy bitcoin, which has rocketed in value in recent months – CNBC

These Altcoins Set a New ATH While...